Grand Commander of the...

The golden coins of Cretan State 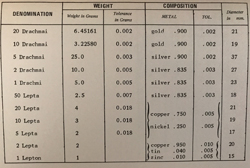 By a 1900 Decree of the High Commissioner of Crete, the Cretan State had the right to issue coins.Unit of exchange was drachma with a 100 lepta subdivision. This decree was also referring the cutting of 10 and 20 drachmas gold coins to serve transactions, both public and private of any amount. Their features are shown in the adjacent table and are exactly the same as the mints of King George A.
The table belongs to S.Gardiakos:The coinage of modern Greece,Crete,Cyprus. 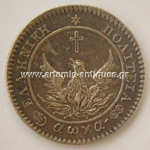 In 1828, the silver Phoenix coin and its copper subdivisions were issued.The value of the silver however was worth more than the value of the coin, and so,some melted the coins and received their melt value.When this became known,there was already issued 13,612 silver coins and governor Kapodistrias stopped issuing them.

There has been much confusion over coin grading. An understanding of grading is essential to anyone active in the hobby or who has old coins to sell. Correct grading is the basis for the proper evaluation of coins. How well a coin is preserved or how badly it is worn has a great deal to do with what it is worth. The asking price for a superior condition specimen can run ten or more times as much as for exactly the same coin in poor condition. For instance watch carefully the images to the left. 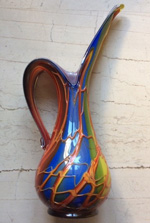 Murano's reputation as a glass work center has its origins in 1291 when the Venetian glassmakers were ordered to install their workshops there for safety reasons of fire.From next century until today Murano began exports and became famous for the production of glass and high quality crystal , enamel , glass with gold and colorful glass developing or improving many techniques such as millefiori,aventurine,lattimo etc.Thus the glassmakers of Murano quickly become the richest and most prominent residents . Since about 1400 they were allowed the honor to carry swords ,they enjoyed immunity from prosecution by the Venetian state and marry their daughters with members of the wealthiest families of Venice. 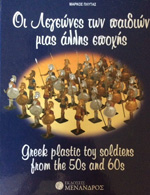 "This company was the pioneer of producing plastic toy soldiers in Greece. The earliest evidence of PAL existence that I have dates back at 1956. The company must have been founded a bit earlier. The founder of this company was Photis Papadimitriou, a young doctor, who suddenly and sadly passed away in 1958. PAL figures were plastic and they are identified by the nail that joins the movable arm to the body of the figure. PAL figures were aesthetically and technologically advanced given the time they were produced. Most of them are 54mm, in size. PAL figures depicted units of the Greek Army but surprisingly, PAL included in its range Scotch Guards, Royal Marines and Ludhiana Sikhs! These figures, although bigger, are much like Heralds. Founding a toy soldier company in Greece back in the 50s, was not the most obvious thing that a young doctor (and also son of a hospital-owner), would had done. So I strongly believe that the late Papadimitriou must have been a hobbyist and a collector of toy soldiers himself. Hence and the production of the three above mentioned figures. PAL lost its momentum as a result of the sad loss of its owner and eventually was absorbed by “Athena” sometime in the late 60s. Most of their figures were included in Athena’s production."
Markos Plytas,Greek Plastic Toy Soldiers from the 50s and 60s 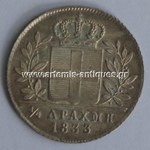 Otto besides the monetary system of Kapodistrias decided to change the name of the base currency with a decree in February 20 ,1833. So the " drachma " name was chosen because it was the basic monetary unit of most ancient Greek cities. The mint of Kapodistrias was abandoned completely and opened a new one in Athens , with machines that came from Bavaria , in Klafthmonos Square. 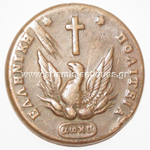 Phoenix was the first silver coin which was first released in 1828 in the state of modern Greece .It was divided into "lepta" (1 Phoenix=100lepta).It's name comes from the mythical bird Phoenix which is reborn from its ashes and so it symbolized the rebirth of the country.

From the printing of Greek banknotes of 1956 there was excess paper with watermark ‘Aphrodite of Knidos’. Therefore it was decided to use it for the 1970’s grand until depletion of stock, since it had the same dimensions. The rest of the banknotes were printed with new paper with watermark the head of ‘Adolescent of Antikythera’, which was already used at the time.

In the late 17th and early 18th century in Greece the silver craftsmen to manufacture 'inferior' jewelry they distorted silver with a metal alloy, the agiari. That was copper and brass. Therefore, in order to whiten the 'dirty' and non-shiny effect of this mixture they used arsenic. So the jewelry that was made in this way are called ‘farmakera’ which means poisonous.

The resources of Greece have been exhausted due to war in Minor Asia and the European forces were unwilling to provide a loan. Increasing the taxes was not a solution and also there was already a large quantity of unsecured paper money. Protopapadakis had a radical idea; he devided the banknotes in half. The left half was even with the half value of the initial banknote and the right half was a treasury bond even with the half value of the initial banknote. This was a very successful action because it brought a huge income in no time for funding war and avoided inflation.

Origin of the Greek word “Chrima” 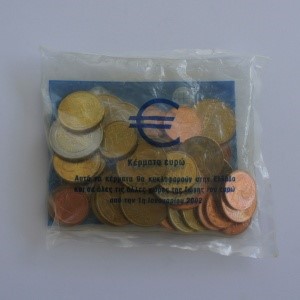 The Greek word ΧΡΗΜΑ (CHRIMA) which means money comes from the ancient Greek verb ΧΡΗ (CHRI) which means “I Need”. 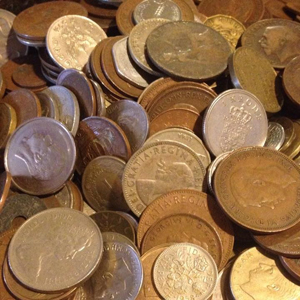 Many coins are named after units of weight measurement such us lira , marko , English pound and Greek ancient talando ( τάλαντο ).The franc was named after the medieval coins lettering REX FRANCORUM which means KING OF FRANCS. Finally the coin of Florence called florin was named after the engraved flower on it. 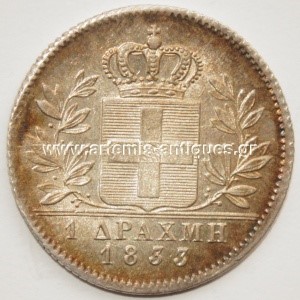 The Greek word drachma ( δραχμή ) comes from the ancient Greek verb seize (δράττω ). It actually means the quantity of something that you can keep in your palm. 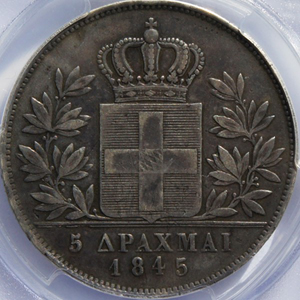 The German word Tal means valley. Joachmistal is a valley of Bohemia which was rich in silver , from which silver coins were made. These coins were named Joachimstaler and in shortcut TALER. The Greek name taliro , the dollar and the taler were named after these coins.